Alexandra Villaseńor, NYC, Usa, Climate rebel, activist and amazon and warrior against those who exploit the earth.

Now let me be very clear: Alexandra Villaseńor is NOT a copycat of Greta Thunberg (Sweden) of whose actions she only learned about later and when, yes she was even more inspired to continue her own actions.

“NEW YORK: On the ninth Friday of her strike, 13-year-old Alexandra Villaseńor wakes to a dozen emails, scores of Twitter notifications, and good news from the other side of the planet: Students in China want to join her movement.

Every week since December 2018, Alexandra Villaseńor, a seventh-grader, has made a pilgrimage to the United Nations Headquarters demanding action on climate change. She is one of a cadre of young, fierce and mostly female activists behind the "school strikes for climate" movement. On March 15, with the support of some of the world's biggest environmental groups, tens of thousands of kids in at least two dozen countries and nearly 30 U.S. states plan to skip school to protest.

Their demands are uncompromising: Nations must commit to cutting fossil-fuel emissions in half in the next 10 years to avoid catastrophic global warming. And their message is firm: Kids are done waiting for adults to save their world.

"Mom, this is so cool," Alexandria says, as she reads the latest list of countries where kids have pledged to participate in a global strike: Australia, Thailand, Ghana, France. "Where is Girona?"

They sit on the couch, still in their pajamas, and Alexandria pulls out the planner she purchased to keep track of all her commitments. Each task is color-coded by geographic scale: Pink for global organizing. Orange for national. Yellow for New York.

First on the agenda is an interview with a reporter from the U.K., who seems caught off guard by the young woman's fervor.

"My generation is really upset." The deal struck at COP24, the U.N. climate meeting in December, was insufficient, she says. "We're not going to let them . . . hand us down a broken planet."

Alexandria raises her eyebrows. "Yeah," she replies, confident. Afterward, she changes into her striking uniform: waterproof ski pants and a down jacket, all in white, just like the congresswomen at the State of the Union and the suffragists of old. She packs her bag - planner, thermos, gloves - and grabs her plastic-encased cardboard signs, which read "SCHOOL STRIKE 4 CLIMATE" and "COP 24 FAILED US." She holds the signs facing inward so other commuters on the subway can't see them. She doesn't like it when people stare. "They'll probably think it's just a science project," Alexandria tells her mother. Then she laughs. "Well, technically it is. It's project conservation. Project save the Earth."

Alexandria commutes on the subway from her apartment on the Upper West Side to the United Nations, holding her protest signs.

It's been four months since Alexandria decided the Earth needed saving. Last year, during a visit with family in northern California, she was caught in the cloud of smoke from the Camp Fire, which killed nearly 100 people and filled the air with unbreathable smoke. The girl suffers from asthma, and for days afterward she felt physically ill and emotionally distraught.

This isn't normal, she thought. This isn't right.

She began to look up articles about the West's historic drought, read reports about recent global temperature rise, asked her mother, a graduate student in the Climate and Society program at Columbia University, to explain the drivers behind global warming. She joined the New York chapter of Zero Hour, a network of young American climate activists.

In December she watched as international negotiators met in Poland to carve out a plan for curbing carbon emissions. A recent U.N. report found that humanity has until 2030 - the year Alexandria turns 24 - to achieve "rapid and far-reaching" transformation of society if we wish to avoid the dire environmental consequences of warming 1.5 degrees Celsius above preindustrial levels. Yet the agreement that was ultimately reached fell far short of what scientists say is urgently needed.

In the midst of all this, Greta Thunberg, a 15-year-old from Sweden, took the podium.

"You say you love your children above all else, and yet you are stealing their future in front of their very eyes," the girl proclaimed to a room full of stunned adults. "We have come here to let you know that change is coming, whether you like it or not."

Recalling that speech, Alexandria's eyes light up. "She just put them in their place," Alexandria says. "That was extremely satisfying."

Alexandria searched Greta's name online and found stories about the Swedish girl's climate strike in front of her country's parliament building, then in its fourth month. Greta said she had been inspired by student activists from Parkland, Fla., who said they would not go back to school until gun-control legislation was passed. "I am too young to vote and to lobby," she told The Washington Post this week. "But I can sit down with a sign and make my voice heard."

Alexandria knew what she needed to do.

She made her first pilgrimage to the United Nations Headquarters on Dec. 14. The next week she was back - with an umbrella. She has endured relentless rain and brutal wind off the East River (weeks three and four). She has braved the polar vortex that sent temperatures plummeting to 10 degrees F (week eight). 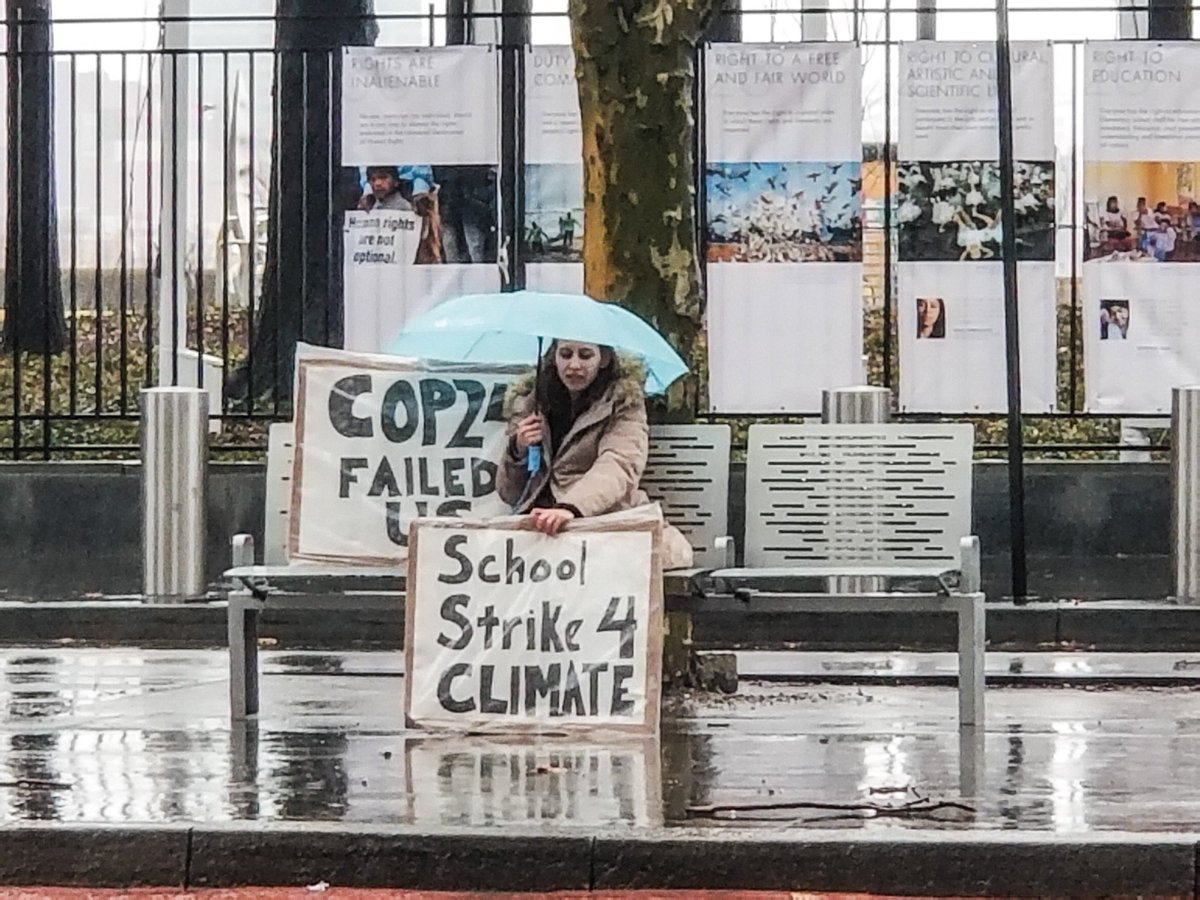 Few of the New Yorkers bustling by ever stop to talk to her. And in her first eight weeks of striking, no one offered to join. "But I stay motivated," she says. "Of course. It's my future on the line."

Many of Alexandria's friends are uninterested in her activism; their Instagram posts are more likely to show off a new outfit than a scene from a protest. Alexandria doesn't blame them - until a few months ago her life had also revolved around sleepovers and school plays. "I guess we're still teenagers," she says, shrugging.

But now she is switching to a private school that could accommodate her activism schedule and staying up all night talking to Thunberg and other kids from Australia, Uganda, the U.K. They are kindred spirits, internet-savvy teenage girls who can recite the results of the latest U.N. climate report and take pride in seeing through what Alexandria calls "the veil of money and B.S." that seems to stall so many adults.

Together, they debate strategy and discuss going vegan. On their strike days, they trade tweets littered with heart emoji and cheer as the walkouts expand. Adults who underestimate the movement do so at their own peril. Since late last year, strikes in European cities have regularly drawn tens of thousands of participants. More than 15,000 people showed up for a strike in Australia - even after their prime minister urged them to be "less activist."

When a Belgian environment minister suggested that the growing protests were a "setup" this month, she was forced to resign. The following day, 20,000 kids were back in the streets of Brussels.

That day, Alexandria shared an image of a Dutch protest on Twitter, alongside the declaration, "It's coming to America. You haven't seen anything yet."

Alexandria has joined forces with Haven Coleman, a 12-year-old striker from Colorado, and Isra Hirsi, the 15-year-old daughter of Rep. Ilhan Omar, D-Minn., to organize the U.S. movement.

Offers of support began streaming in almost faster than the girls could respond. The executive director of Greenpeace agreed to hand the group's social media accounts over to students for the day of the strike. The New York chapter of the Sunrise Movement, the grass-roots group advocating for the Green New Deal, offered to handle outreach for March 15. Prominent climate researchers including Michael Mann, Kathrine Hayhoe and Peter Kalmus followed the girls on Twitter and began to organize an open letter of support from scientists. Alexandria and her mother have been invited to attend a special briefing next week on the U.N. Climate Summit being held later this year.
"These kids go straight to the top, and the adults listen," Hogue says.
"That's because they see the opportunity of the strikes and what it will do as good as the next person," Alexandria replies. "They see it." Still, even the 13-year-old is stunned by the momentum of the movement, which seems to have taken on a life of its own. Sometimes all she can do is watch the emails roll in and think, "Whoa. I did that."

"That one down there is mine," Alexandria says. She points to a bench about 100 feet from the U.N. visitor entrance, as close as she's allowed to get to the protected building. It's raining - a persistent chilly drizzle - and the wind keeps blowing her posters down. But Alexandria is feeling good about the day. For the first time since she started her protest, she will have company later that day.

link to a short speech: https://www.youtube.com/watch?v=EbVn1XlZPsA

“Care for each other and
for our Mother Earth”